Get fresh music recommendations delivered to your inbox every Friday.
We've updated our Terms of Use. You can review the changes here.

by Michael Garrigan and Andrew Jones 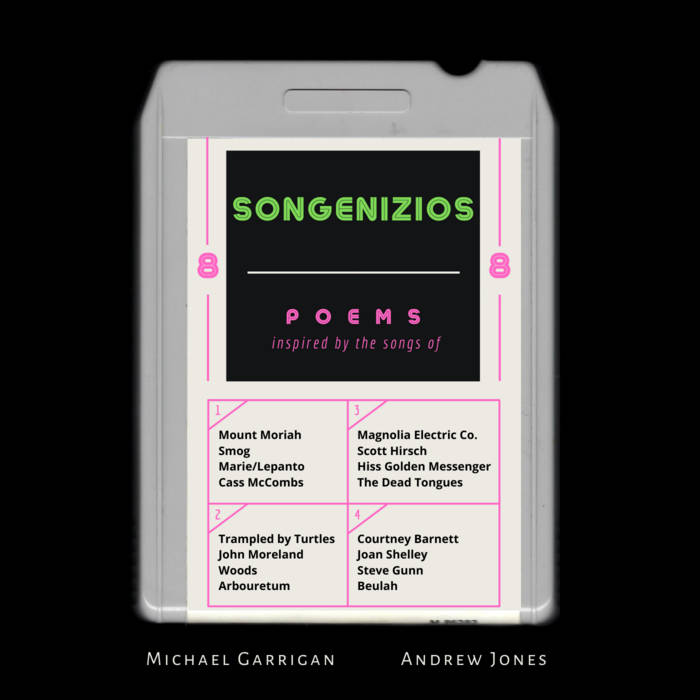 Making mix tapes and playlists is a kind of metaphysical act for me. The pressing of the play and record button down at the same time, the click of the reels, the hiss of the tape, the sharing of a link, the finding of the perfect opening and closing songs, the tracking, the cover art, the mystery of just how this music will be received—it creates an ethereal bond between the artist and the listener and the giver and the receiver. A communion. A faith in Side B.

The poet Kim Addonizio invented the sonnenizio when she published "Sonnenizio on a Line from Drayton." Take a line from an existing sonnet, use it as the opening line for a new sonnet, repeat one word (in some form) from that first line in all the following lines, and then end with a rhyming couplet. There exists in this creation: something formal, but not too formal, and a dialogue with another work of poetry or a poet.

When Andrew reached out with his songenizio idea, I jumped at the chance to create a playlist for someone I had never met (what better way to introduce yourself?) and to discover new music. I’ve never really enjoyed writing formal poetry. I’m much more of a rambler. My poems take the shape of the rivers I wade, so I was a bit apprehensive about writing in a set form, but I went with it anyway, the excitement of sharing songs just too hard to pass up.

Sharing music has always been a way for me to share stories and experiences. Here, check this Cass McCombs track out, maybe that melody will catch you like it did me as a bat careened across a full moon silhouetting a dying campfire. Maybe you can feel that smoke smoldering in those Steve Gunn guitar licks. Maybe you can smell the honeysuckle along the river lifting that Woods chorus into a holy mantra.

The quarantine, which had just started when Andrew reached out, magnified the power of formal poetry and the experience of sharing music. All of a sudden, I lost almost all human interaction and the energy that I fed off of and my days lost their structure. It was my daily bike ride along the river and listening to Andrew’s playlist that gave me something to hold onto during those early days of the pandemic. It became a way of communicating with someone through song. Each one was a little piece of kindling we handed each other, waiting to see what kind of fire the other would create in their own isolation. A conversation centered on music and poetry. What a beautiful thing. Writing these poems in this form gave me a structure I needed during a time when all the structures I knew were disintegrating. Music and poetry have the power to give us something we never knew we needed.

All proceeds from this chapbook will directly go to the Sweet Relief Musicians Fund: sweetrelief.org

* None of the musical artists listed were involved in the production of these poems beyond their words serving as first line and inspiration.

Michael Garrigan writes and teaches along the banks of the Susquehanna River in Pennsylvania. He is the author of two poetry collections—ROBBING THE PILLARS and the chapbook WHAT I KNOW [HOW TO DO].

Andrew Jones is Asst. Professor of English & Creative Writing at the University of Dubuque in Iowa. He is the author of LINER NOTES (coming in Oct. from Kelsay Books) and MOVING LIKE DIM GHOSTS. ... more

Bandcamp Daily  your guide to the world of Bandcamp